The rebalancing of the second world economy requires far-reaching measures to address the growing debt problem.

China’s growth has been driven largely by investments and export. It managed to maintain high GDP growth of 10% per year for almost three decades. Its export-oriented policy was supported by an undervalued renminbi. China nowadays has a global export market share of 6.8%. This means it exerts a strong influence over world trade movements. 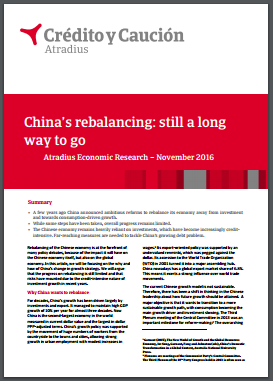 The current Chinese growth model is not sustainable. A major objective is that it wants to transition to a more sustainable growth path, with consumption becoming the main growth driver and investment slowing. The plans also expressed ambitions of liberalizing exchange rates, interest rates and the capital account. Most progress has been made through non-economic reforms, such as anti-corruption measures. China’s capital stock per worker is still significantly below that in advanced countries (it is 30% below the US level).

Investment growth has been increasingly credit-driven and is going to less efficient uses. The most troubled are state-owned enterprises (SOEs). These have reported higher and faster rising leverage compared to the private enterprises, and significantly weaker profitability. It is not so much the size of China’s total debt which creates this risk, but its high growth rate. One way to see this is to look at the so-called credit gap: the difference between actual debt-to-GDP and the long-term trend of debt-to-GDP. The credit gap reached 30.1% over the first quarter of this year, much higher than what is thought to be sustainable. The current pace of credit expansion is reminiscent of pre-crisis behaviour in countries like Thailand and Spain. If the savings rate goes down, the debt problem is alleviated as well.

The productivity slowdown was in part the result of overinvestment and excess capacity in a number of important industries, in particular the construction sector and upstream industries such as steel, cement and coal. Investments in China in recent years have largely been credit driven. Another reason for the change in growth strategy was that investment-driven growth impeded the growth of personal consumption. China’s consumption share in GDP has declined gradually over past decades.

The credit-driven investment rise in China was made possible by high household savings. There is a clear reason why Chinese households are such big savers. The absence of a developed social welfare system keeps the savings rate high and prevents consumption from picking up further. Chinese households are forced to self-insure. The Chinese regime has kept interest rates artificially low, effectively forcing households to save against negative real interest rates.

In all economies the expansion of GDP is the sum of growth of consumption (private and government) plus investments plus net exports of goods and services. Higher demand for services is a sign that China is growing more developed and is moving up the global value chain.

China has made a number of steps in liberalizing the exchange rate and opening up the capital account. On October 2016, the RMB was formally recognized as a global reserve currency by the IMF.

Crédito y Caución has been the leading credit insurance provider for Spain's domestic and export sectors ever since it was founded in 1929. With a market share of 54%, for more than 85 years the Company has contributed to the growth of businesses, protecting them from payment risks associated with credit sales of goods and services. Since 2008, Crédito y Caución is Atradius Group’s operator in Spain, Portugal and Brazil.

With a global market share of 23%, Atradius Group is a global credit insurance company active in 50 countries, with has access to credit information on more than 200 million companies worldwide. The global operator consolidates its activity within the Catalana Occidente Group.