Global trade growth is grinding to a halt. Asia, the fastest growing region in GDP terms, has seen its trade volumes shrink at an accelerating pace in the first half of the year. Together with the United States which is experiencing flat trade growth, these regions are driving the slowdown. The global  outlook is now subject to exceptional uncertainty and the link between global trade growth and GDP growth seems broken. 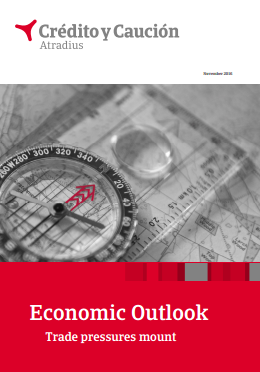 These developments as such already call the relationship between trade growth and economic growth into question. But matters for trade are made far worse by political developments. These are flatly trade unfriendly, as signalled not only by the Brexit vote in the UK, but also by the stalling of the regional trade liberalisation efforts like TPP (US/Asia), TTIP(EU/US) and even CETA (EU/Canada). The climate has changed.

The 0.3% contraction in total growth in Latin America is finally bottoming out. Growth is picking up in Eastern Europe to 1.5%. Asia-Pacific remains the fastest-growing region with growth of 5.7% forecast this year. The UK, while enjoying a strong year so far, supported by the weak pound, is stepping into the unknown in 2017 as the negotiations to leave the EU should begin in March.

Hampering trade bodes ill for global economic developments, which are still  depressed by lack of demand in the advanced economies and idiosyncratic issues in a number of emerging economies such as Brazil, Turkey and Russia. Nevertheless,  the pressure on growth in the emerging economies is easing, driven by strong growth in India, bottoming out of energy and commodity prices and the ongoing search for yield as global monetary conditions remain soft. Meanwhile, the insolvency climate is not expected to change much with the figures in the majority of countries remaining significantly above pre-crisis levels. Insolvencies in advanced markets are on track to be flat in 2016. Emerging market economies are facing rising insolvencies, though the magnitude is lower than previously expected as several key markets emerge from recession.

Crédito y Caución has been the leading credit insurance provider for Spain's domestic and export sectors ever since it was founded in 1929. With a market share of 54%, for more than 85 years the Company has contributed to the growth of businesses, protecting them from payment risks associated with credit sales of goods and services. Since 2008, Crédito y Caución is Atradius Group’s operator in Spain, Portugal and Brazil.

With a global market share of 23%, Atradius Group is a global credit insurance company active in 50 countries, with has access to credit information on more than 200 million companies worldwide. The global operator consolidates its activity within the Catalana Occidente Group.